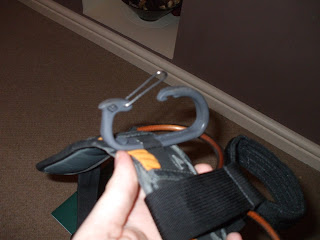 Following my review of Black Diamond Blizzard accessories, it has been drawn to my attention that with moderate use the ice clipper experiences a terminal issue whereby the clip malfunctions and stays open outside the clip. (See pic). A number of users have complained about these on UKC, indicating a common problem resulting in the loss of ice screws.

"The screws were nowhere around and the wire gate on my little plastic Black Diamond ice clipper krab was on the wrong side of the gate. One to watch out for."

"I threw my ice clippers away because of this happening, though I did it before I lost any screws. The petzl caritool is better."

"lost a screw for the very same reason! The worst BD product ever!"

So for those of us who use Ice clippers, just be aware of this issue! I myself still love the ice clippers, but will keep a close eye on them from now on! However I should point out I have been using these for 2 years and had no issues.... Mr Reynolds has similar opinions of the ice clippers, so until one of us has this issue, I'll continue to place my faith in these!
Posted by Unknown at 18:31 No comments:

Jetboil PCS – The coolest stove out there?

Of this there is no doubt, but is it any good? I've had one of these for a while now, so I thought I might as well review it!

Now for those are you who aren't familiar with the Jetboil, let me explain;

The Jetboil is an ultra efficient, lightweight, cooking system. The stove is designed to take up as little space as possible in a rucksack by storage for all the components (including the gas canister) being inside the cooking pot. At the moment there are 3 Jetboil systems on the market;

The PCS and GCS are designed to be modular, by this I mean if you purchase a PCS, you can buy additional components to have a GCS as well. The main difference between the GCS and PCS is the type of pot used for cooking. The PCS uses a 1 litre companion mug, where as the GCS uses a 1.5 litre cooking pot. Both systems uses the same burner self igniting burner system which is compatible with screw top canisters. The GCS also features a stabiliser kit so that the unit can be a standalone stove and will have additional stability on the floor rather than just the base of the gas canister. Essentially though if you buy a Jetboil PCS, you can buy a stabiliser kit and a 1.5 litre pot and have a GCS as an additional option. 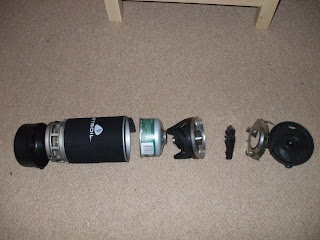 I bought this stove to use when I am short expeditions. It appealed to me because it was efficient, light and easy to use. My stove combination consists of the Jetboil PCS and the stabiliser set, along with a gas canister this weights in at 670g. The addition of the stabiliser kit means my stove is more "team friendly". Without the stabiliser the Jetboil can only be used the jetboil accessories, by carrying the stabiliser kit I can share cooking with other team members as the kit converts the stove into a more universal setup (see pic) 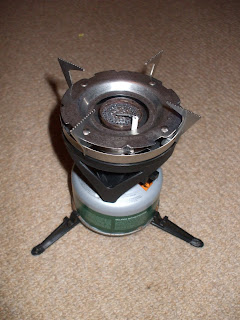 I did a quick test to check the units specs listed on the website:
The stove should be able to boil water in 2minutes (0.5L), and boil around 12 litres per 100g canister. I bought a new canister and boiled as many 0.5L cups as possible, whilst averaging out the time taken on each. The average time taken to boil 0.5L of water was 1min 53.4secs, and I got 17 Litres of water from a single canister. Personally I think this is excellent for a small canister. All Jetboil pans use Jetboils patented Fluxring technology to increase efficiency, it functions in the same way a radiator works, by providing a larger surface area to heat up while cooking, as a pose to the flat bottom of a pan or mess tin. The same system is used on the 1.5L pot, 1L mug, and Frying pan.

In terms of cooking with the Jetboil a lot of people have said you are fairly limited in what you can cook. You can cook any kind of ration pack style meals. This just involves rolling the meal up and cramming it into the cup! Other than that anything that you would cook on a hob you can cook on the PCS. Which is ideal for short term expeditions. 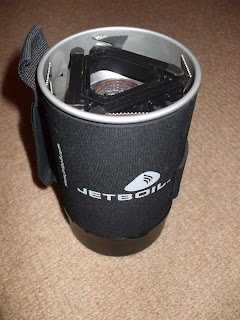 The Jetboil is very well thought out, after you have finished cooking there is a plastic cover to protect you from burns while you are eating. There is also a sewn handle on the companion cup so you can move around while the stove is cooking.

In additional to being quite stable when fitted with the stabiliser kit, the stove is also fairly windproof, and is fitted with a small piezo electric igniter meaning there is no need to fiddle with matches in poor conditions.

Drawbacks? Well I'm yet to find one, however I have enjoyed shooting down some common Jetboil gripes lately which I thought I'd share....


Moan: "You can't cook big meals like you can with other stoves"
Owning: Purchase the 1.5 Pot, or purchase the stabiliser kit and a mess tin so that you can switch to that when you are out for longer

Moan: "The cartridges are so small"
Owning: Purchase a bigger screw seal canister....Idiot

Moan: "You have to hold it while it's cooking"
Owning: Put it down? Or better still buy the stabiliser kit and put it down


In addition to the various components in the GCS and PCS, there are a number of other accessories to customise your Jetboil kit:

Coffee press (£17.50)- turn you Jetboil into a coffee brewer
Frying pan (£44.99)- Fluxring frying pan, for efficient frying of tasty goodness
Hanging kit (£27.50)- a kit for handing your jetboil when big wall climbing, snow holing or whatever other use you could think of!
Jetboil cutlery (£13.50)- Highly temperature resistant nylon cutlery, light and tough, personally I'll stick with my titanium spork!
Additional coloured sleeves for companion mug are also available for further customising of your set (£5.99)


All in all you can't go wrong with a Jetboil, brilliant, customisable, efficient, not overly cheap but consider it an investment! RRP is £85, but browse around and you can get one for around £60! Stabiliser kit around £17.50 is also a must have!
Posted by Unknown at 18:21 2 comments: