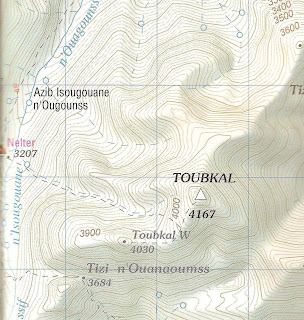 Well I've put off writing this post until I was sure this was going ahead, and I'm now sure it's going to happen :)

Myself and 5 others are heading off to Africa to climb Toubkal 4200m (13,700ft). It's the largest Peak in the Atlas mountains, and a mountain I've wanted to climb for a while now. I was sat with Atko the other day and we said "lets just do it man". So having rounded up our team for the trip (which we capped at 6 people) we are now in the planning phase.

Now for me that means letting all my current tech take a step up. I've already scanned and Georeferenced a map of Toubkal, which has intergrated fully with my PDA. To do this was a bit fiddly to be honest. I had to install Memory Map navigator (which I discovered was different to memory map OS5). This allowed me to scan in my new Toubkal 1:50k and calibrate it for use with GPS. To do this I tried taking GPS lat/long co-ordinates from Google earth however this was less than effective, and the first prototype of my map informed me it was 200miles to the summit of Toubkal. So I scoured the internet and eventually found a GPS track of the route. I managed to identify various points in the track and put the co-ordinates into memory maps calibration system. Time will tell if it works but I'm optimistic!

All in all watch this space, I've got a few new bits of kit on the way, reviews up soon!

Overall I am so psyched for this trip, back to high altitude with a great group (including my baby bro) on a peak I've wanted to do for months!!