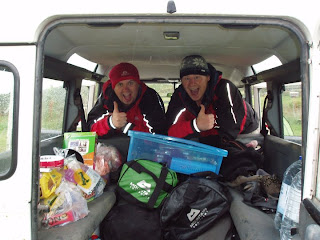 Haven't had chance to write anything for a little while now (saving myself for OutDoor perhaps!). Sadly I haven't spend my time absent from writing on here doing anything other than work! I have been on a total of 3 expeditions over the last month, so busy times! Last weekend was the practice expedition for a group I have worked with since September, and they are excellent guys and girls to work with!

This was also Si's first expedition in the DofE world so a chance for us to team up away from the centre for a change. We packed pretty heavily taking a mountain of equipment including multiple stoves, 2 climbing racks (incase we got a bit of spare time to sneak off to Windgather), and tonnes of other gear. We were lucky enough to have a well equipped Landrover Defender as our vehicle for the weekend. After loading the gear up we headed into Leek to get some food for the weekend, then headed out to the Peak. We met with our group at the agreed start point (the Winking Man pub) and then headed out. The weather held until we reached the campsite when a gentle drizzle descended, soaking everything. Not to be discouraged we set up camp and waited for the groups to come in. After everyone was safely in camp we set about cooking the most ambitious meal I have ever attempted on a camping stove; a lamb tagine with cous-cous. The end result was very tasty! 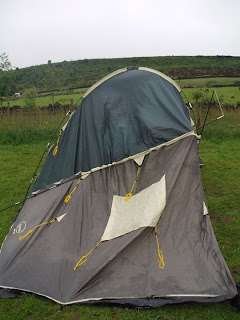 Day 2 rolled around and overnight the winds had all but destroyed a tent being shared by 4 of the lads (see right). The tent had been well pitched however the problem with large family tents like the one in question is they act like a giant wind sail, and sadly this tent came away the worse for wear. During day 2 I was walking with a small group for half a day then leaving them to it.  All of the group were students I had taught previously at bronze level, and I was impressed to see how their skills had developed since they first started. They confidently navigated from Gradbach to Three Shires Head, and over to the Cat and Fiddle. At this point I rallied up with Si and left the group to continue on for the rest of the day alone (having been satisfied of their navigation skills). The remainder of the expedition was spent making our way to checkpoints and checking the group were ok. The rain stopped on the 3rd day, and gave way to some nice sunshine for a change. A brief emergency at Goytsclough quarry meant me and Si had to drive a guy to his car at Pym chair as he had recieved a call that his father had been taken into hospital and needed to get back home asap. Aside from that there was no major drama!

All in all pretty standard stuff, and nothing exciting I'm afraid, I do however promise that in a couple of weeks time there will be a wealth of interesting content fresh from OutDoor!
Posted by Unknown at 21:36 No comments: