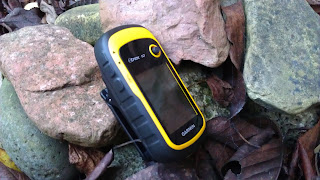 "Out with the old in with the new". When I saw Garmin's new range of GPS sets at the OutDoor show, I was in 2 minds; happy that Garmin were looking to improve on the already excellent eTrex systems, but worried that nothing could measure up in terms of simplicity, value and function. However from what I saw at the show I was impressed enough to get one.

At around £100 the etrex is cheaper than it's Magellan equivalent, and with a similar level of functionality. The box comes with a USB cable, and manual in the box, along with the unit. First things first, the unit is light, and comfortable to hold, the buttons on the sides are simple and labelled, the small joystick on the front is a new addition from the old etrex. The unit feels rugged, solid feel, rubberised sides, just the kind of feel you want in an outdoor unit. The batteries are easily inserted by means of a small D ring on the rear of the unit, rotating it pops the battery compartment open. 2 AA batteries later the unit was on, and acquiring satellites. 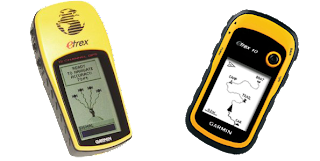 The unit acquired a 4m fix very quickly, and after a couple of minutes updated this to a 2m fix. On the previous etrex I always found it seemed to take an eternity to get a fix from cold, but with this unit it was quick and efficient. The menu system is simple and easy to navigate, the buttons on the side can be used to scroll up and down if needed, however the joystick on the front can be used to scroll through the menu, and by pressing it you can select the highlighted option. There are a number of options that I personally won't use, fishing, moon and sun etc. However after 5minutes I had the unit configured to British National Grid, the datum's are selected automatically which is useful if you are new to GPS sets. The Map screen is initially blank and only begins to be useful when you are moving, as you move your track is recorded, you can then add waypoints along the route, zoom in or out with the side keys, or move around with the joystick.

In addition the unit has a backlight, which is activated by holding the power button, a pack including a case and belt clip can also be purchased for those who are looking for a more stylish way to carry the unit. The etrex 10 is completely waterproof and dustproof to IPX7 standards.

One new feature of the etrex 10,20 and 30, is that it boasts the fact that it is the only GPS set on the market that can connect to GLONASS and GPS at the same time, decreasing the time it takes to get a fix. For those who don't know, GLONASS is the Russian Federations answer to GPS, which will provide a collection of satellites that can be used by the Russians in a time of war (when GPS is restricted to US use only). Garmin states that by using both systems simultaneously the speed of a fix is increased by 20%. 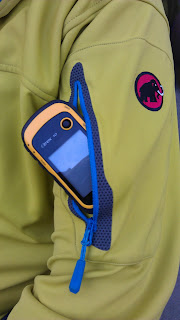 The only down side about this unit is that it is not capable of accepting expansion maps, however this is not something I care about - if I did I would have bought the etrex 20 or 30...The Garmin 10 can however have waypoints from Memory map or other mapping software uploaded to it, as well as GPX files for Geocaching.

Great unit, great price, great addition to Garmin's range of GPS, and an ideal unit for anyone wanting a cheap, functional, and up to date GPS unit, at a cheap price.
Posted by Unknown at 17:23